Two guys and a life story. This is who we are: 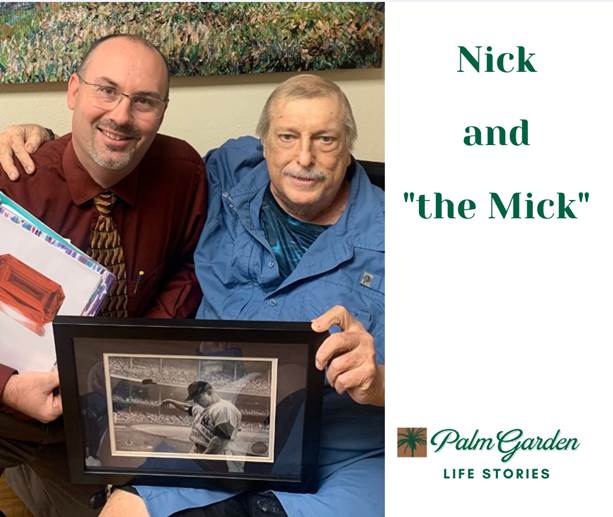 THE NICK WITH THE MICK

Hey! That’s Nick, our Director of Guest Services at Palm Garden of Clearwater.

Nick is Palm Garden family. Been at Palm Garden Of Clearwater for 11 years. He started off as business office assistant, proved himself and became business office manager. Now he’s the smiling face and friendly voice most people see in our center every day as Director of Guest Services.

Nick has been married to a wonderful 3rd grade teacher, Jen, for almost 18 years. They have 2 boys Nicholas (14) and Luke (12). I’m considering getting my sports agent license because Nick’s boys are rock-star athletes. Both play on competitive travel-ball teams. I guess it’s true what they say- “the apple never falls far from the tree.” Nick instilled his love of the baseball and all sports “Tampa Bay” in his boys. Just about every weekend he and Jen are off with the boys playing baseball somewhere in the state.

Now a little bit about the gentleman on the right. That’s our guest Mick. He wasn’t always “the Mick.” His given name is Michael and it’s a really cool story.

Michael grew up in New York. Big family, they’d have everybody over on Sundays for dinner. Remember when extended families- aunts, uncles, grandparents and cousins would get together for meals on weekends? I kind of miss that tradition.

And they loved the Yankees. Back then games weren’t on every day like now. Only great teams got national air time. They watched every Sunday. You can picture them enjoying home cooking like only grandma and mom can make. Everybody’s gathered around the TV watching the game. When I close my eyes I see it in black and white- it was that long ago. And up to the plate walks arguably the best switch hitter in baseball history- #7 Micky Mantle. And then it happened.

It’s like a scene from a movie, there’s Michael- just a little guy, not even a year old. He’s kind of crawling around on the floor, his uncles watching the game with cool drinks and snacks. As Mantle is announced and grabs a bat, Little Michael yells for all of his uncles to hear “The Mick!” Not even a year old and this kid just said “the Mick.” His Uncles told the rest of the family and from that day forward, Michael was known as “Mick.” Their family still talks about it today and 65 years later we see a picture of The Nick and The Mick.

It’s the little stories like these that help us understand on a very personal level how to care for our guests and residents. We don’t “rehab the broken hip in 110.” We celebrate life stories and restore independence for guys like Mick.

And that makes him part of our family.